The One People Canoe Society, along with dancers and community members from many Native towns and villages across Southeast Alaska visited the Shakes Island Tribal House after a monumental parade through downtown last week.

On May 4, the sun rose on Wrangell Island under gray skies – though those skies would part slightly and sunshine would descend upon a place that is the spiritual heartland of the Tlingit in Wrangell as the Chief Shakes Tribal House was rededicated for the first time in more than 70 years.

Last week, over the course of May 2-4, Wrangell entered the pantheon of history as nearly 1,000 visitors from the Native communities of Southeast Alaska and beyond traveled to the Borough to witness the rededication of the Tribal House and Shakes Island.

The effort, which began in late 2011 with a concerted effort to renovate the aging totem poles located on the island, blossomed into a full-fledged reconstruction project that saw the original structure come apart piece by piece – and saw a new structure rise in its place, with adzed boards of cedar, original and new artwork, and copper trim that updated the look of the traditional Tribal House.

The Civilian Conservation Corps built the original house in 1940, with help from members of the community in Wrangell. After the project was complete, a dedication ceremony was held and Chief Shakes VII, or Charlie Jones, and his family used the house intermittently until his death in 1944.

The 2013 event, which was the brainchild of the Wrangell Cooperative Association, saw the house restored to its former glory after years of falling into disrepair.

WCA Board of Directors president Tim Gillen said he was glad to see the project completed and that the House would continue to be a focal point of the community.

“It was great,” Gillen said. “A lot of work went into and it came together really well and I’m actually kind of glad it’s over, all the hard work that is. It was a year of hard, tough work, but now it’s done. In the future it’ll be open for local folks and gatherings as usual.”

The rededication weekend officially began on Wednesday, May 1 with a public storytelling session on the island. It was during that part of the event that Native history, legend and folklore combined into one for the benefit of both Elders and the younger generation of Natives and Wrangellites alike.

The next morning, storytelling continued, but in the late afternoon of Thursday, an armada of traditional canoes made their way from Vank Island to the shores of Wrangell. The flotilla represented communities from the entire region and comprised five canoes. The group originally had seven vessels but high seas swamped two of them during the trip.

The One People Canoe Society, along with Wrangell captain Shane Gillen, brought canoeists from Kake, Kasaan, Port Protection, Yakutat, Juneau and other communities in Southeast.

On Friday afternoon a parade down Front Street included the combined dance and paddle groups from Wrangell and beyond.

The parade made its way to the island where the groups gathered for a historic photo in front of the House and its newly renovated Bear screen. The dance groups also took part in presentations of regalia and clan performances at Wrangell High School during the three-day event.

The main rededication ceremony came on Saturday morning and included Wrangell’s Native dance group performing for visitors and guests inside the House.

With clan leaders seated at the top of the area near the refurbished Chilkat Blanket screen, they took turns addressing each of the visiting clans and also the Naanya.aayi of Wrangell.

The Naanya.aayi are the leadership clan of the Tlingit in Wrangell and are related to all seven of the officially recognized Chief Shakes.

Richard Rinehart, Jr., a member of the Sealaska board, was one of the representative clan leaders to take part in the rededication ceremony. During his turn to speak to the 125 present in the House, he explained his wearing of the “peace hat” and its significance to the event and the “Kwaans,” or communities in Southeast.

“The hat that everyone has noticed and asked me about is the peace hat,” Rinehart said. “It’s a hat that the Baranof Commission gave to the Kik.sadi of Sitka to bring peace. The hat is very symbolic and it represents that peace. Our people have not always been a friendly people. We often fight amongst ourselves, fight with other Kwaans, and there have been battles with Sitka, battles with Tsimshians, and with Kake. There are people here today that might feel animosity toward each other. But, that is not what we do in a time like this. At a time like this we would be dishonoring our clans and dishonoring our ancestors if we did not have peace.”

After Rinehart’s statement, he removed the hat from his head and placed it on the head of Ishmael Hope, a Sitka native living in Juneau. Hope blessed the House with peace as he walked from corner to corner with the reflective, metallic headdress.

Hope is connected to the Shakes House through his grandfather, who was an Elder connected to Carol Brady, one of the clan mothers to the Naanya.aayi.

“It was absolutely spiritual and the whole concept of Tlingit spirituality is about holding on to the ancestral spirit the best we can,” Hope said. “Just watching this happen was an amazing thing.”

The corner posts of the House were also marked with a set of four handprints – those of Rinehart, Michael Hoyt, Marge Byrd and Jackie Dailey.

Gil Gunderson, the man who was tapped to be Chief Shakes VIII – but chose not to in order to avoid conflicts among the community – was seated front and center among the leaders of the clans. 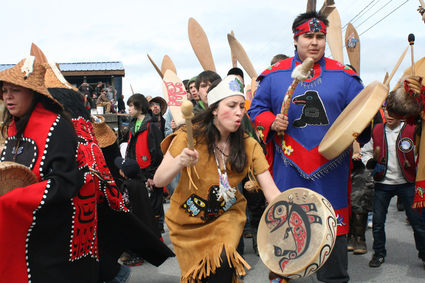 Brooke Leslie, center, plays a traditional drum and dances during the parade from downtown to Shakes Island on Friday.

“It was very emotional and I still am emotional right now as I am talking to you,” Gunderson said after the ceremony. “I have a lot of memories of that house. My grandmother and I lived on that island when I was a young child. It was an experience for me. The rededication of the house, to me, is a symbol of the Tlingit people and their unity. I think the people that put this together have done a great thing for us.”

Gunderson’s handprints were a part of the previous incarnation of the House.

Tammi Meissner, a member of the Naanya.aayi and a dancer with the Shtax’heen Kwaan group, said she was overcome by the event.

“It was beyond even putting words to how I feel right now,” Meissner said. “You can feel your ancestors and feel their power, and the acoustics in the house are just so loud. You can feel the drums and singing. It’s just overwhelming. You can feel it deep down in your heart and soul.”

The weekend ended on Saturday evening with a presentation of gifts to members of visiting clans.