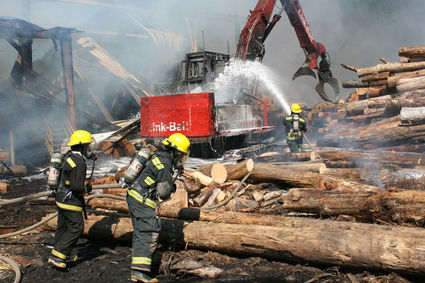 Three fire fighters work to put out the fire at the Allen mill on Tuesday, July 30. Although the mill was a total loss, no one was injured in the incident.

According to WVFD Fire Chief Tim Buness the fire began in the early afternoon and saw a quick response given the distance to the fire from the Zimovia substation and the Fire Hall.

“We received the call at 2:08 p.m. and twelve minutes later the first engine arrived from the substation,” Buness said. “Eighteen minutes after initial call the trucks from town arrived. We had 35 volunteers and five retired fire fighters on-scene.”

A response of that size required extra coverage in downtown, Buness added.

“When we have a call that big out the road we have to make sure we have a crew in town for EMS and just in case there was a fire that might happen in town,” he added. “So we left an engine and crew in town.”

Buness added that the fire started on the front left-hand corner of the mill and quickly spread, engulfing not only the main structure but storage building used for flammables and a small crane that was adjacent to the main fire.

He credited non-WVFD personnel for their assistance in fighting the fire.

“We had a tremendous amount of help from the general public, the State of Alaska and the road workers. The state brought their big tanker truck, as did the city with their water tanker. SECON also gave us a few loads of water from their truck,” Buness said.

The incident was wrapped up at approximately 8 p.m. according to fire department records. Three engines from the WVFD, as well as the three tankers, were used to fight the fire.

Allen’s property was one of the last small mill sites in the region and had been instrumental in a number of recent initiatives, including a biomass energy production study spearheaded by the Southeast Alaska Conservation Council in 2012. 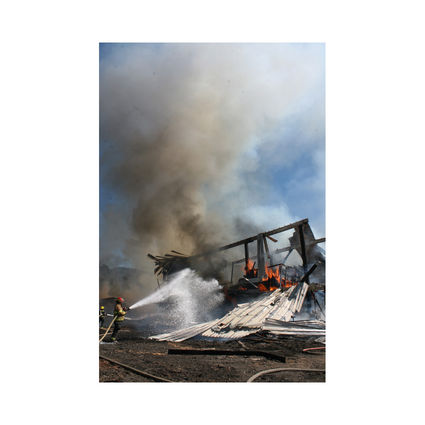 Fire fighters work to knock down the fire that destroyed the Allen mill at 13 Mile Zimovia Highway on Tuesday, July 30.

“There might be some other small ones, but those two are the active mill operations here,” Rushmore said.

Allen told KSTK FM that he and his family did not wish to comment on the fire at this time, though in a posting on Facebook, Allen’s wife, Angela Allen said she was grateful for the response the WVFD showed while fighting the blaze.

“Thank you to all the firefighters for being out there doing everything you could to get the fire out,” Angela wrote. “Also thank you to all the support from our community. Life is life and things happen for a reason. We shall see what the future holds for us.”

The cause of the fire remains under investigation by the Alaska State Fire Marshal due to the extent of damage to the property and the value of loss attributed to the blaze. 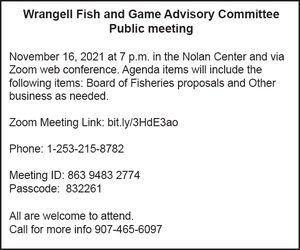