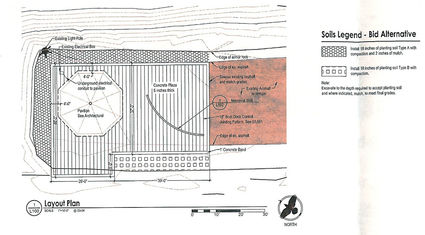 Above, this diagram illustrates an overhead view of Wrangell's future Mariners' Memorial being developed by landscape architectural firm Corvus Design in Juneau. The memorial is to be sited at the southwest corner of Heritage Harbor. Below, a side and overhead view of the planned memorial wall.

Drawings for the future mariners' memorial at Heritage Harbor were unveiled at Wrangell's monthly Port Commission meeting on Nov. 6 in the City Hall Assembly Chambers.

Drawn up by architect Christopher Mertl of Corvus Design in Juneau, the memorial plan calls for a concrete plaza designed to resemble wooden planking, a pavilion and weathered steel patina memorial wall evocative of the prow of a ship.

"When it takes that curve it rakes out," explained Harbormaster Greg Meissner, going over the drawings (see illustration) with commissioners. The wall will then feature etched memorial plates and historical graphic panels depicting various themes from Wrangell's past.

The plan includes alternate bid options for landscaping and design that will be considered moving forward.

Meissner said his department will hold a workshop this winter to gather community input on the design before approaching the Rasmuson Foundation for funding. Overall, commissioners seemed pleased with the initial plans.

"We're on the right track. We've been doing this for a decade," Meissner told them. He said a more concrete plan should be available for review by their next meeting and was hopeful construction would be possible within another year.

Also on the agenda, the commission discussed its parking policy at Wrangell's harbors. Commissioners received a letter from Rod Nowlin expressing concern about current time restraints. He currently rents a stall at Heritage Harbor but is gone five months of the year and would like to be able to leave his truck parked in the lot without fear of ticketing or impoundment.

In general, ramp-side parking at Heritage and Shoemaker is limited to 72 hours.

"Other than that, the idea is about active vehicles," said Meissner.

Ten- and 30-day passes are available from the Harbor Department upon request, at no charge. Beyond that amount of time, the department no longer considers a vehicle actively parked but stored.

"Right now we don't have any fee structure for parking at all," Meissner explained. "We only have storage." He said the issue is further complicated by space concerns; there are fewer parking spaces at the harbors than there are boat stalls, with many daytime and short-term boat users to consider as well.

Both departments have recently put renewed interest in removing wrecks and abandoned vehicles from the harbor lots as police recently finished an impound yard providing a space for them. In addition, Meissner pointed out that storage yards are available on the island.

After discussing the matter, commissioners agreed they were satisfied with the current parking policy.

Similarly, Meissner updated the commission on the recent removal of the Pacific Queen from Shoemaker Harbor, which had capsized against the harbor grid last month.

"The boat in Shoemaker is gone," he said, noting that it was removed earlier that day by contractors over the course of four hours. After gathering quotes from five contractors, Meissner hired Brett Woodbury for the job for $5,000.

Meissner said the experience underscores a need to have a formal document for boat-owners before they tie up, a checklist that, among other things, will verify they have insurance. He said he is working on the document, which is based on one the community of Homer uses.

"It's just easier and cleaner," he said. 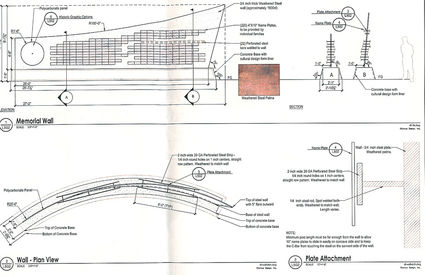 Commissioners also decided to request Planning and Zoning to vacate the right-of-way for a theoretical connection of Silvernail Road to Case Avenue. Since the would-be section of road cuts through The Marine Service Center (MSC), it means that legally no permanent structures can be built there.

"To me, it's hindering us," Meissner explained. "I don't think it's necessary."

Also concerning the MSC, the Harbor Department will address complaints received from contractors about staff renting out the pressure-washer equipment. The reason given for making it available is to speed up turnaround time for boat work.

The equipment will only be usable by boat owners if no other privately-available service can be found in a reasonable amount of time.

The commission's next scheduled meeting is set for Dec. 4.