Grand Camp focusing on youth for next century 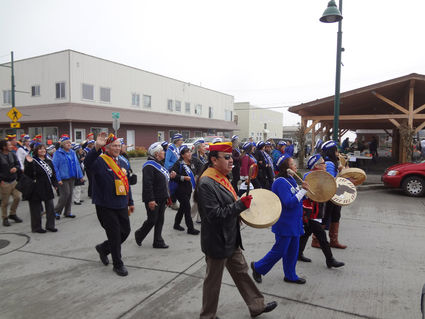 Looking ahead to another century, delegates with the Alaska Native Brotherhood (ANB) and Alaska Native Sisterhood (ANS) met in Wrangell last week for their 100th annual Grand Camp. Seventy-one of 120 camp delegates from Alaska, Washington and Oregon were able to attend the four-day conference, which brought about 140 visitors in all.

Dedicated to advancing civil rights and improving living conditions for Native communities, the Brotherhood was founded in Sitka in 1912, with an auxiliary Sisterhood established in Wrangell in 1916.

Keynote speaker Ethel Lund, president emeritus of SouthEast Alaska Regional Health Consortium, related her grandmother's story of the ANS founding. The group was first formed in 1916 to help ANB take care of the ill and the needy.

"It was made by fishermen and housewives," Lund said during her remarks Oct. 7. Looking ahead, she said the organization would need to return to its grassroots, particularly in terms of getting more young people involved at the local level. "In my mind the only way we can move forward is if we're unified."

With such an auspicious anniversary, there was much history to look back to, with a memorial service and several meals and tributes dedicated to past members. It was a time to look forward for the organization as well. One of the more historical changes agreed to during this year's Grand Camp was the retirement of the ANS Auxiliary Banner.

"This whole organization has been fighting for equal rights," said Sandy Churchill, ANS Camp #1 president. Despite the group's aims, she explained the banner still portrayed the organization as being deferential to ANB. ANS is rather a partner organization, she said, and retirement of the banner reflects updates to the organization's status made in its constitution earlier this year.

ANS delegates decided to make the change Thursday. A new banner will be designed for a new century, she explained, and the old one will be put on display at the Nolan Museum.

"Since it started here they thought it would be a good time to retire it here," Churchill said.

During Grand Camp time was taken for attending to organizational business, with financial reports and executive updates. New presidents to ANB and ANS were elected Friday; Sasha Soboleff of Tenakee will serve as the ANB president for the upcoming year, and Johanna Dybdahl of Hoonah was chosen to head ANS.

Issues of regional significance were also highlighted during the four-day conference. One issue important to Southeast communities is rectifying exclusion from the Alaska Native Claims Settlement Act. Along with Haines, Ketchikan, Petersburg, and Tenakee, Wrangell's Native community was excluded from the 1971 legislation.

A delegation was dispatched to Washington D.C. in June to push for passage of a pair of bills that would allow the communities to set up their own corporations. Grand Camp delegates watched footage of Sen. Lisa Murkowski presenting the bill for its first hearing in the Senate on Oct. 8.

Delegates heard from several state legislators in person, with Rep. Dan Ortiz and Rep. Sam Kito III delivering remarks to the Grand Camp. Sen. Bert Stedman highlighted some of the projects he has supported in recent years, such as the renovation of the ANB Hall in Sitka and the tribal house on Chief Shakes Island.

On policy issues, Stedman said it would be critical for citizens of rural and southeastern Alaska to keep active in infrastructural and capital project discussions during upcoming legislative sessions, which would directly impact their quality of life. Out of step with the Senate Majority, the senator also expressed his support for Medicaid expansion, and for reappropriating tax credits to oil producers.

For him, he explained the end aim should be preserving a way of life for future generations, so that a century hence the delegates' descendants might still be furthering the Grand Camp's goals of equality and strong communities. 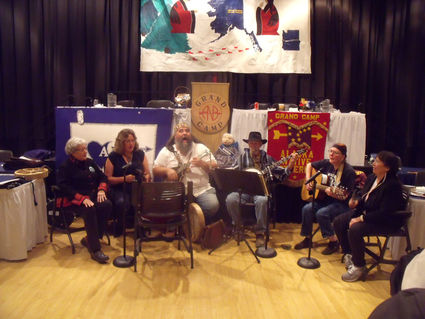 The George Holly Band regales participants at the Grand Ball in the Nolan Center Saturday night, bringing to an end the four-day ANB/ANS Grand Camp. Bringing delegates from across Alaska, Washington and Oregon, the annual gathering was last held in Wrangell in 1998.

"One of the things that is really important for us moving forward as a society is civil rights," Stedman said. "It is important that ANB and ANS stay intact and bring in the youth to learn the language and the culture."

The remarks mirrored the feeling within the Grand Camp, which was also focusing on encouraging greater youth involvement.

"This was the first time we ever had a youth panel," Churchill said. "We asked them 'what does ANB and ANS mean to you?'"

More than listening, Churchill said the organization would have to improve how it reaches out, using technology

and social media to keep young

people engaged. The changes wouldn't have to be drastic – she said even keeping an updated and navigable website could be expected to help spur involvement.

Other programs, such as Head Start and Johnson-O'Malley, already encourage Native youth to take an interest in their heritage and language, and Churchill said membership in ANS and ANB can be a means to stay involved in the community beyond school.