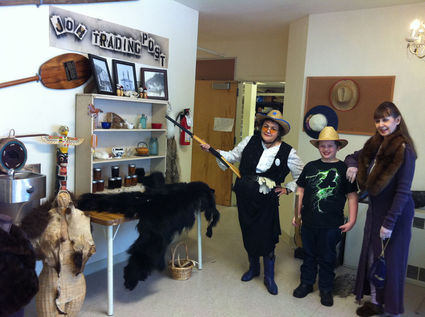 Virginia Oliver, Trevyn Gillen and another celebrant show off their frontier spirit at the "Trading Post" during last year's Trappers Carnival.

residents a reason to shake away the winter blues and have a little fun on the town. Put on by volunteers and area

businesses, the four-day series of events will try to feature activities fit for kids and adults alike.

The celebration kicks off tonight at the Elks Lodge with its second-ever chowder cook off, starting at 5 p.m. Whether corn, crab, clam or something else entirely, participants are asked to bring submissions an hour before the judging begins. Dinner-goers will then double as judges, with the winner receiving the entry fees as a prize.

Afterward the Elks will also hold the first of their Turkey Shoot dice competitions, and Long John Bowling is set at 8:30 p.m. Bowlers sporting a union suit will get to bowl for free.

As part of the celebration, on Friday evening the Wrangell High School girls basketball team will be hosting Craig starting at 6 p.m. Concessions will be slinging burgers, brats, pretzels and other treats through the evening from 5:30 to 8:30 p.m.

Across the way, the Elks will be serving burgers and continue its Turkey Shoot, while Kung Fu Panda 3 will be playing at the Nolan Center throughout the weekend at 7 p.m.

Saturday's schedule will be packed with activities, starting at 10 a.m. Residents will have a few activities to choose from: Wrangell Chamber of Commerce will be hosting its annual Gold Nugget Bazaar at the Stikine Inn until 3 p.m.,

featuring local crafts and goods; Harbor Light Assembly of God will hold its carnival until 2 p.m., with a variety of games, haystacks, and

baked goods; and a Texas

Hold-em and dart tournament will be held at the Marine Bar all day until close, with

chili, fry bread and brats to nosh on.

Saloon, with activities and fry bread sponsored by the local Alaska Native Sisterhood. Back by popular demand this year, the Hayes Bed Races will be held near Wrangell Cooperative Association's new cultural center from 1 to 3 p.m.

As with the Saloon and bed race, the annual Tent City

Days festival brings back the frontier aesthetic of the late 19th Century, back when Wrangell was part of the wider gold rush. Some of the celebration's traditional elements include dressing up, such as Wrangell's "Shady Ladies," and is meant to give the community something fun to do during the otherwise quiet late winter months.

people can fish themselves prizes at Inner Harbor airplane float in the fourth annual Curley Dog Adult Scrap Fish Derby. Bait will be provided, but bring your own gear and a current fishing license. The grand prize is a round trip ticket for two with Breakaway Adventures, but other prizes will go to participants through the afternoon. Proceeds from the $5 entry fee will go to local charities.

During the derby volunteers from the fire department will be selling hot dogs and chips for its upcoming stair climb in Seattle, which raises money for leukemia and lymphoma research.

Sign-up for the annual dog show starts at 5 p.m. Pet owners are invited to pit their pooches against an obstacle course, perform tricks and compete in a variety of categories. The show starts at the community center gym at 5:30 p.m.

From 6 until 10 p.m. the Hope Community Church of God roller skating rink will have its grand reopening, following renovations and replacement of the facility's roof last year. The Garnet Grit Betties roller derby team is sponsoring the event, and concessions will include Kahlua pulled pork sliders, nachos, pizza and other treats. 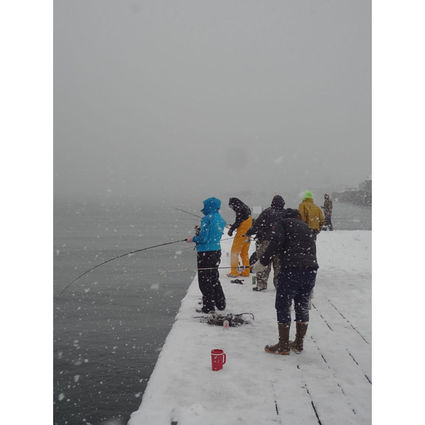 A frozen group of anglers vie for whatever they can snag from Wrangell's float-plane dock during last year's third annual Curley Dog Adult Scrapfish Derby.

Also at 6 p.m., evening two of the Wrangell-Craig basketball games begin at the high school gym. The final round of the Elks' Turkey Shoot begins at the lodge at 6:30 p.m., along with its Saturday steak night. Teen bowling begins after the high school games are over and goes on until 11 p.m.

Down by the harbor at the Marine, several adult events will go on through the evening, with karaoke at 9 p.m., a plunger race after that at 10, and a wet T-shirt and jock competition at midnight. All participants in the latter will receive gift certificates good for the bar and pizza shop.

On Sunday, cribbage players can start to sign up at the Elks at noon for the annual Bob Smith & Burrill tournament, which begins at 1 p.m. From 2 to 4 p.m., Alaska Island Community Services' Crossings program will sponsor a dodgeball tournament at the community center. Tent City Days wraps up at the Marine at 2 p.m. with an open mic afternoon, followed by an auction for Toys for Tots and the "Chicken Poop Board" at 6 p.m.