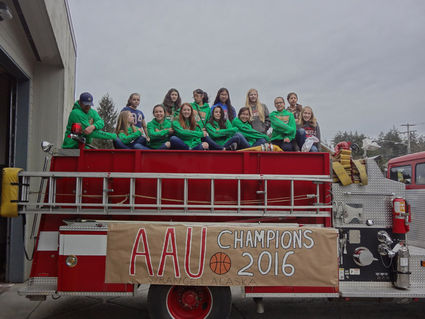 Along with Coach Wayne Easterly at left, the girls of Team Wrangell show off their championship sweatshirts on Tuesday before taking a victorious ride through town on the fire engine. The AAU A-team went undefeated this year through three tournaments, most recently taking first in Juneau last weekend.

Team Wrangell was unbeaten through three tournaments this season, taking first in Ketchikan in January, at home last month, and during last week's tournament.

After beating out their regional rivals in five games, the A-team girls faced Juneau team HoopTime in Saturday's final game. Wrangell led throughout the game, and its full-court defense kept Juneau down to only two points through the first half. The final score was a 24-14 Wrangell victory.

"They did phenomenal," said Wayne Easterly, who coaches the team alongside Gary Allen Jr. and assistant coach Penny Allen.

Three of the AAU team's players made the All-Tournament Team: Kaylyn Easterly, Maddy Harding and Julia Miethe. Playing on the B-squad, Jade Balansag was also named to the All-Tourament Team.

The B-team placed fourth overall, winning three of six games. During one of its wins, player Renee Roberts landed a buzzer-beater to tie up the game, sending it eventually into double overtime for a win against Sitka.

"Our sixth graders really stepped up and did very well," Easterly said. For a number of the team's girls this season will be their last with AAU. They will be moving on to the high school level, which Easterly anticipated will be a boost for the Lady Wolves' program next year.

Now in its third year, the AAU program is meant to bridge the gap between elementary school and 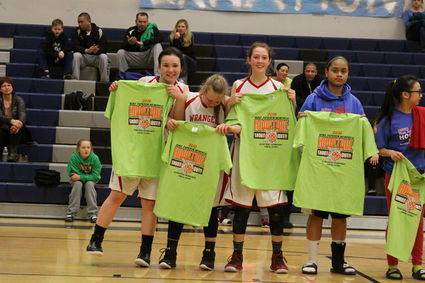 high school play, boosting the overall basketball program. Girls on the team invest plenty of time, practicing two hours each night during the week and participating in various fundraisers and community service projects.

"It's pretty intense," said Jamie Roberts, a parent and supporter of the program. "It's been a big

turnaround and a lot of work."

Putting on the program takes a lot of work as well, with parents putting in time and resources for

equipment, play space and travel expenses. Roberts estimates it takes around $15,000 a year for the team to play. Last year Team Wrangell entered itself as a

contestant for the July 4 Queen Competition, raising better than half of its planned expenses during the process.

Girls in the program will be looking for their own fundraising projects this summer, be it chopping firewood or selling goods at the monthly community market.