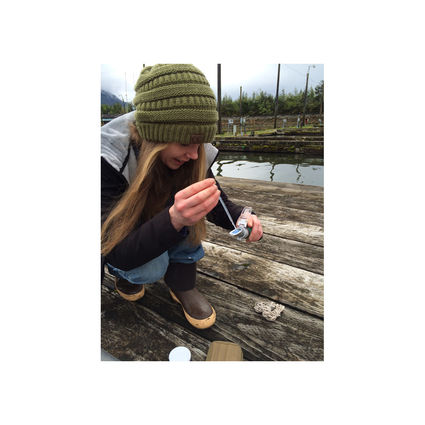 IGAP technician Kim Wickman applies water to a refractometer to determine salinity at Shoemaker Bay Harbor on Sunday, during a sample collection to identify harmful algae.

Wrangell's tribal environmental office has joined step with others in the region in tracking the spread of harmful algal blooms.

Sitka has spearheaded a regional testing program, working through the Southeast Alaska Tribal Toxins network to establish the region's first laboratory suitable for identifying marine biotoxins. Through the network, STA Resource Protection Department is working with 14 tribal partners, the National Oceanic and Atmospheric Administration, the Washington Department of Health, the State of Alaska and several fishing groups.

The department sent technician Esther Kennedy to Wrangell to help the office set up and use its own lab equipment, acquired through IGAP. The training is part of a broader effort to have monitors working throughout Southeast communities in the hope of reducing the health risks associated with paralytic shellfish poisoning (PSP) and similar illnesses.

To that end, Wrangell IGAP coordinator Chris Hatton explained her office budgeted for a digital microscope with camera attachment, an oilless vacuum pump, carboy, a manifold for water sample filters and other equipment. The WCA Tribal Council approved adding the program, which required an $8,000 initial investment. The office also took on a new technician, Kim Wickman, who started on Friday.

Part of Wickman's duties will include weekly sampling, collecting water from areas near to identified shellfish harvesting sites and examining them for one of three types of phytoplankton-Alexandrium, Dinophysis, and Pseudo-nitzschia. The phytoplankton themselves are not harmful to humans, but they produce toxins which are absorbed by filter-feeders like shellfish.

When the populations of these varieties increase, developing into an algal bloom, they may together emit a significant amount of toxins, which then find their way into the surrounding ecosystem. The shellfish are not harmed by the toxins, but if ingested by humans their effects can be dire.

For example, Dinophysis can produce okadaic acid, which causes diarrhetic shellfish poisoning. While not known to be life-threatening, the name sums up its unpleasant symptoms. Alexandrium produces saxitoxin, the cause of PSP. First signs feature numbness of the oral membranes, and severe cases can include nausea, vomiting, neurological effects, respiratory failure and ultimately death.

Pseudo-nitzschia produces domoic acid, which can lead to amnesic shellfish poisoning. Symptoms of this include vomiting, nausea, diarrhea, cramps and hemorrhagic gastritis. Domoic acid damages neurons in the brain in particular, by causing an uncontrolled increase of calcium in the hippocampus and amygdala. Neurological symptoms can include headache, dizziness, loss of short-term memory, and at its worst seizures and cardiac arrhythmia.

"We haven't found any of these yet, yesterday or today," Hatton said Monday.

Identifying the three isn't the simplest process. For one thing, they are tiny, ranging between 20 to 100 microns in size.

"That would be in the tens of millionths of meters," Kennedy elaborated.

Picking the three out from the many other forms of microscopic lifeforms found in samples is another challenge.

"They can be pretty different," Kennedy said. "You're looking at a full ocean's worth of plant diversity in a lot of ways."

"Right now it's just getting use to what we should see from what we hope to not see," Wickman explained, peering into a microscope. "We're going through and we're just looking for anything that looks ordinary."

Once possibly identified, Hatton explained they can take a snapshot of the suspect phytoplankton and send it to the Sitka lab for verification. If confirmed, the office would then collect a sampling of shellfish from nearby and send them over for examination. Kennedy explained a good sample size for butter clams, as an example, would be between 10 and 12 specimens. The turnaround time for shellfish testing would be one to two business days, after which the lab could confirm whether the clams had been accumulating toxins.

Though the three identified genera are known to produce toxins causing PSP and ASP, they do not do so all the time.

"There haven't been very tight correlations between the water conditions and what's happening, and whether or not the phytoplankton are producing toxins," said Kennedy. "We know what they're producing but we don't know why. Sometimes it produces it, sometimes it doesn't."

If PSP or other toxins have been found to be affecting local shellfish, residents are warned off from harvesting them until the situation changes. Blooms are not static occurrences. They eventually run through the nutrients they are after and leave the area. But even when the algae has moved on, the toxins it released may linger.

"A few species hold on to their toxins for years. Butter clams in particular can be really notorious for that," Kennedy said. Other species, like mussels, usually pick up toxins the soonest but also filter it quickly. How long a community may have to wait until receiving the all-clear varies. "It depends on what species, it depends on where you are, and it depends on how big the bloom is."

Establishing the STA's Environmental Regulatory Lab (or STAERL, pronounced "sterile") has been a gradual process since late 2014, and Kennedy anticipated it should be fully ready in May.

"For now we sort of want to start with the partner tribes and get some real results out to the community," she said. 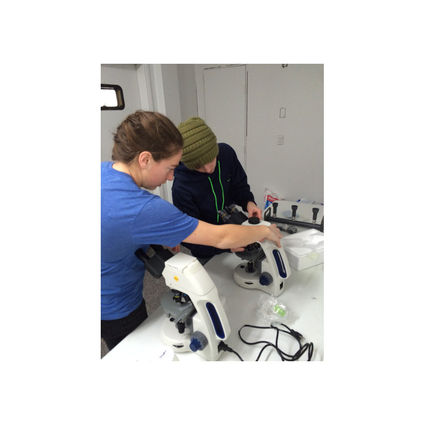 From that, the program would like to eventually put together an interactive map that would inform the public where toxifying phytoplankton have been identified from among the participating groups.

"We're working on getting that infrastructure through a variety of different grants," Kennedy said.

Wickman said she was looking forward to being a part of the project.

"It is a different type of working environment, and it was something where I could better myself and the community," she explained. "My son and I have obviously made Wrangell our home and I want to make sure that he has a healthy environment to grow up in."