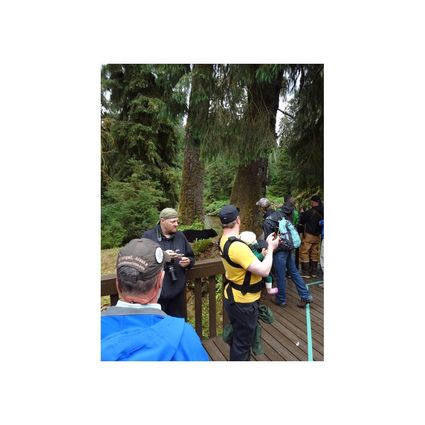 A group of visitors to Anan Wildlife Observatory get a close-up view of a black bear on July 6. Salmon in the nearby creek draws both black and brown bears to the site, offering a rare opportunity to see both species at once in the wild.

Events for the 7th Annual Bearfest are already underway, with the first two workshops and symposium presented yesterday at the Nolan Center.

The annual activity was started in 2010 by Sylvia Ettefagh, an outfitter with Alaska Vistas and commercial fisherman. Drawing a number of notable speakers and participants each year, Bearfest serves to highlight the local bear population, particularly that found at nearby Anan Wildlife Observatory.

About 30 miles southeast of Wrangell, the observatory overlooks Anan Creek's lower falls, which is a popular fishing spot for both brown and black bears. Managed by the United States Forest Service as part of its Tongass National Forest, the site draws thousands of visitors each summer from around the globe. Last summer season 2,615 visitor passes were issued for the site, and a study commissioned by Wrangell's Convention and Visitors Bureau found visits to Anan alone had a local economic impact of $1.5 million.

Bearfest's symposiums give participants an opportunity to learn about bear populations elsewhere in Alaska and abroad, with experts in a variety of fields bringing their findings to the lectern. Among the festival's educational and entertainment line-up this year are several new faces and a few returning ones.

Shannon Donahue is the executive director of the Great Bear Foundation, headquartered in Montana. The non-profit group dedicates itself to the conservation of bears and their habitats worldwide, and to that end engages in a number of informational and recovery projects.

Ettefagh knows Donahue from her time as an interpreter at Anan, and is pleased to have her as a returning speaker. The researcher presented her findings on interactions between bears and humans in the Chilkoot River area last night at the Nolan Center, as well as discussing the mitigating adverse effects from bear-viewing activity. She speaks there again tonight at 7 p.m., to discuss the polar bear population in Churchill, Manitoba.

This evening's first symposium, at 6 p.m., will feature Mark Higley, a wildlife biologist for the Hoopa Valley Tribe in California. He will discuss the effects of trespass marijuana – crops planted illegally in remote locations – on local bear populations. In a 2014 story circulated by the U.S. Fish and Wildlife Service, illegal growers cultivating marijuana on Hoopa ancestral lands have taken to using toxins like anticoagulant rodenticide to poison and deter predators, which can be devastating to the local bear and fisher populations, among others.

"There's a big issue down there," said Ettefagh. "I thought it would be a good subject, being part of the popular discussion these days."

Another perhaps more appetizing presentation will be delivered tomorrow evening at 5 p.m., with Seattle chef Tamara Murphy demonstrating her craft at the City Dock shelter and Stikine Inn. The award-winning chef will prepare a grilled salmon dinner, highlighting one of the region's most distinctive foods as well as a crucial component to the ecosystem.

"The whole idea of Bearfest, it's not just about bears," Ettefagh explained. The annual festival also showcases local resources and the Wrangell community's strengths. "Seafood is one of those resources."

Bringing Murphy on for the festival was a partnership between the organizers and local businesses, including the Stikine Inn, Trident Seafoods, City Market and Sylver Fishing Company. The dinner is also a fundraiser, so Ettefagh encouraged people to come.

Back by popular demand, Georgia-based band The Accomplices are confirmed to play at this year's festival. The group performed at Bearfest in 2014, and left a positive impression with its blend of country, folk and bluegrass. The Accomplices will play at the Totem tomorrow at 9 p.m., and will headline a show at the Nolan Center Saturday at 8 p.m.

For those with a penchant for taking pictures, wildlife photographer Robert Johnson will host the first of two workshops tomorrow at 10 a.m., focusing on composition and lighting. The course builds on the lessons conveyed at last year's Bearfest. On Saturday at 1 p.m., James Edens will hold another workshop which will explain how to improve photography taken using SMART phones with the help of a few trusty apps.

Throughout the weekend the Nolan Center will be putting on children's films thematically revolving around bears, such as Kung Fu Panda and Disney's Brother Bear. Check the festival's event schedule at http://www.alaskabearfest.org/ for complete listings.

A plant walk by USFS botanist Joni Johnson and interpreter Corree Delabrue will start tomorrow at Volunteer Park at 1 p.m. The two will walk participants through an assortment of edible and medicinal plants to be found in local forests.

Events for children include a special visit to Irene Ingle Public Library by Smokey the Bear, for the weekly "Read with a Ranger" session by the Forest Service. That begins at 10:30 a.m., followed a half-hour later by a teddy bear clinic.

An assortment of kids' games will take place during Saturday's Community Market at the Nolan Center, from 10 a.m. to noon. The events include the fish toss, "cub-o-war," Twister, relay races, craft making and more.

Adults and young people alike are invited to attend a bear mask making demonstration by local artist Eleanor Carlisle at noon, also on Saturday. A wider collection of her work is currently on display at the Nolan Center. 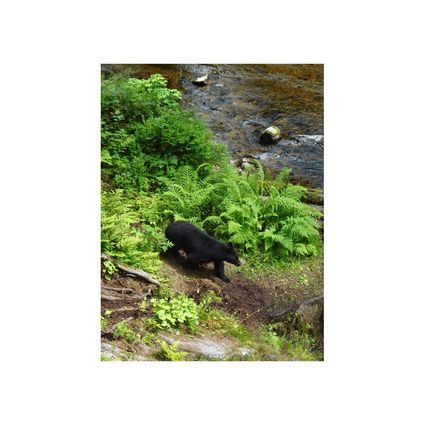 A black bear heads down to the lower falls at Anan Creek on July 6, looking for a bite to eat.

Bearfest's annual pie eating contest follows at 1 p.m., with a music workshop and jam session by the Accomplices at 2. At 5 p.m. Native storytellers will relate traditional tales inside the Chief Shakes Tribal House.

Sunday concludes with the marathon, half marathon and 5K run, organized by the Southeast Beasts. Signup begins at 7 a.m., with the race itself beginning at 8 a.m. A pre-marathon meeting and feeding will be held the previous evening 6 p.m inside the Nolan Center, with useful information for interested runners.

After the marathon, Bearfest will have its raffle drawing at noon: Two round-trip tickets from Alaska Airlines. Tickets are limited to 700.

The final event of the weekend is a slideshow presentation by Johnson at 1 p.m.