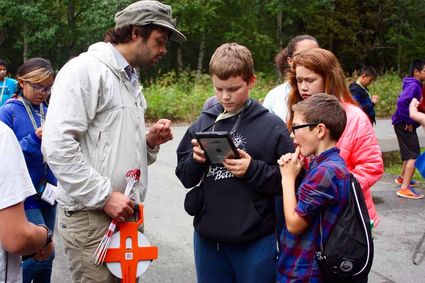 Rowen Wiederspohn learns how to use an iPad to plot GPS points in a field during the ExxonMobil Bernard Harris Summer Science Camp in Anchorage last week.

Earlier this month a Wrangell youth was among four-dozen Alaskan students to put their math and science skills to the test in Anchorage.

Seventh-grader Rowen Wiederspohn was accepted into the ExxonMobil Bernard Harris Summer Science Camp put on each year by the Alaska Native Science and Engineering Program (ANSEP). Hosted by the University of Alaska Anchorage, the two-week, all expenses paid, summer program focuses on honing young Alaskans' science, technology, engineering and mathematics (STEM) skills, through a variety of workshops and special projects.

"It was good," said Wiederspohn, who was drawn to the program by his interest in someday becoming an engineer.

One of the keynote projects students were engaged in was the Mars Lander Challenge, where they used household materials to construct a spacecraft capable of absorbing shock from a planetary landing. Students also got to meet veteran astronaut Bernard Harris Jr., who related his journey as the first African American to walk in space and the extreme elements he encountered during his two shuttle missions in 1993 and 1995.

He started the Harris Foundation after his retirement in 1998, and the organization has invested in community-based initiatives to support education, health and wealth. The annual summer camp was started in 2005 as part of a partnership between Harris' and ExxonMobile's philanthropic foundations.

Among the other projects and competitions he and 47 other students took part in, Wiederspohn and two teammates took first place in a bridge-building competition. The parameters of the structure's design were that it had to be constructed of balsa wood, and span at least 55 centimeters but be no more than 75 cm long.

Wiederspohn explained his team decided to keep their bridge as small and compact as possible, in order to maximize the strength-to-weight ratio of its materials.

"If it was too heavy it wouldn't be able to hold very much," he reasoned. "We did a Warren bridge design," which lays out the trusses into equilateral triangles in order to spread out the load being borne by the bridge. The tried and true design can often be spotted in railroad bridges across the world.

The students also learned how to use global positioning systems in the field, and how to construct a building which would better be able to stand through an earthquake. Students were guided along in such exercises by engineering professionals and ANSEP instructors.

Wiederspohn said an ExxonMobile engineer helped walk him through the earthquake simulation, helping him to tread the fine line between rigidity and flexibility his construction would need. Built from K'NEX components, the students' structures were put to the test on a shake table.

The Wrangell student said the experience has solidified his desire to pursue engineering as a profession, an interest he has had for several years. At home, he has enjoyed constructing projects in his spare time, be it with Legos or with the game Minecraft on the computer.

"You should see the stuff he builds, he builds worlds," commented Wiederspohn's father, Lee.

Now that the younger Wiederspohn has been admitted into the ANSEP program he was excited to say he will be invited to attend such camps every summer until he graduates.

"Through hands-on activities, such as building robots and testing spacecraft, students are able to see how science, technology, engineering and math integrate with daily life," Harris said in an accompanying release.

Partnering with the Harris Foundation and ExxonMobile on this particular camp for the past seven of its 11 years, ANSEP is part of the University of Alaska system. Its goal is to improve enrollment numbers and hiring patterns for Alaska Natives in STEM career fields, through such hands-on extracurricular programming and professional mentoring. 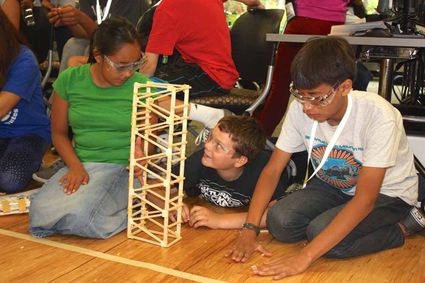 At center, Wrangell student Rowen Wiederspohn explains to two onlookers how his team's balsa bridge took first place at the ExxonMobil Bernard Harris Summer Science Camp held in Anchorage. The engineering-centered camp is held in association with ANSEP, an accelerated learning program which has expressed interest in developing a residential school in Wrangell.

The program has also this year launched a year-round acceleration academy in the Matanuska-Susitna area, and has expressed interest in possibly locating a residential, sister academy at Wrangell's former Institute property. The proposed campus would become home to between 400 and 450 students from around the state, and would prioritize education toward STEM-related fields.

Last month the Wrangell Borough Assembly approved formation of a steering committee to track the program's process and potential development of a residential campus. On the committee, Assembly member David Powell said he and the committee chair, school superintendent Patrick Mayer, would be headed to Anchorage today in order to see ANSEP's activities firsthand.