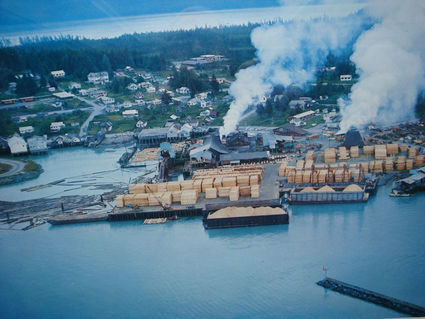 In this aerial view of the Wrangell mill from 1970, a chip barger is prepared for transport to Sitka's pulp mill. Billowing smoke, at right was the mill's bark burner and at left its boiler for steam power generation.

Editor's note: Frank Roppel was in the timber industry from 1956 to 2002 and a Wrangell resident since 1992. After graduating from high school in Ketchikan and receiving a degree from Oregon State University, he began full time employment for Ketchikan Pulp Company in 1959. Rising to sawmills manager, Roppel became the first president of Sealaska Timber in 1980, and served as executive vice president and general manager of Alaska Lumber and Pulp from 1984 until its closure.

At the advice of his wife, the late writer and historian Patricia Roppel, he began putting together a history of the l...