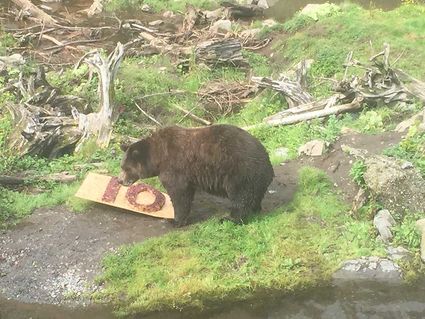 SITKA – Fortress of the Bear celebrated two milestones in July the 10th birthday of Killisnoo, its very first bear cub, and the sanctuary's 10th year in operation.

At his birthday party, Killisnoo was treated to two special "cakes.'' One, made of bread, eggs, honey and salmon berries was in the shape of the figure 10.

"It took two hours to bake it,'' said Evy Kinnear, who along with her husband, Les, runs Fortress of the Bear.

The other, made of cardboard and non-toxic papier-mache, was filled with 4 pounds of dog bones and honey and topped with berries. It looked like a traditional bir...