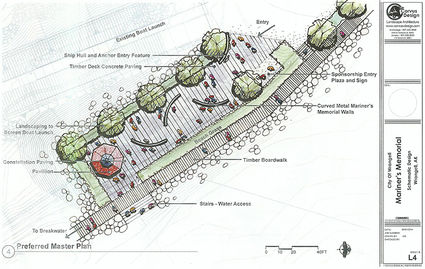 An overhead view of the planned memorial shows the site is expandable, with room for multiple steel walls for the placement of plaques. Greenery and a seaside view will give the site a pleasant atmosphere.

A steering committee for a proposed memorial is seeking out public support for the project.

A memorial dedicated to Wrangell's lost mariners has been a longstanding ambition for a number of residents. The current project took off over a decade ago, after a group of high school seniors worked on identifying a location and a design for a memorial. Their effort was prompted by the death of Ryan Miller, a local fisherman whose vessel capsized while in Clarence Strait back in 2005.

Wrangell's Port Commission became engaged in the project in 2009, and over the years and with considerable public i...