A march for mutual respect 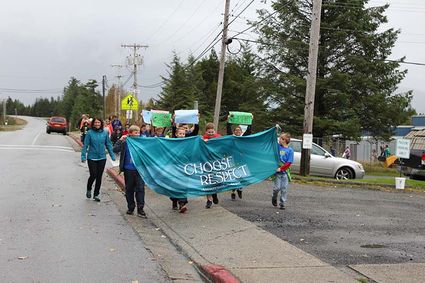 Flanked by teacher Laura Davies at left, Wrangell fifth graders Ander Edens, Johnny Allen, Trevyn Gillen and Avery Gordon bear a banner promoting "Choose Respect" at the head of the elementary school's march. Students at Evergreen Elementary School took part in a "Choose Respect March" last Friday. Members of the wider community were also involved in the event, which coursed through town from the school to Front Street and back. The purpose of the march was to encourage respect for others, and students took time to prepare supportive signs and banners conveying that message. The campaign was lent official support, with the Mayor David Jack last month issuing a proclamation for the day and a representative for Sen. Lisa Murkowski reading out a proclamation to the same effect. The core message of the wider Choose Respect Campaign initially founded in 2008 is to discourage abusive relationships and domestic violence. In Alaska marches have been held in 170 communities, and supporters cite a 2015 survey suggesting such cases have been declining, by 32 percent since 2010. A local affiliate of Ketchikan group Women in Safe Housing is being formed, with meetings beginning in June. Member Kay Larsen explained a new name will be chosen at their upcoming meeting, and that the group will be focusing on creating a safe and caring community.