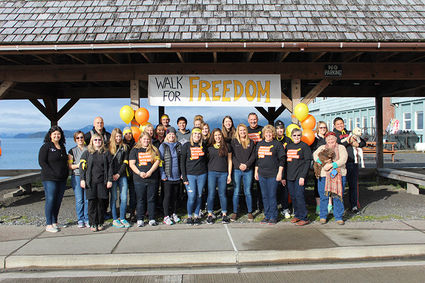 At center wearing her ribbon around her head, Courtney Haggard and a group of supporters get ready to walk five kilometers through Wrangell midday Saturday, to raise awareness of slavery still ongoing in the 21st Century.

A group of residents last weekend took part in a march meant to remind the community that slavery is still a problem in the world today.

The United Nations' International Labour Organization estimates that over 40,000,000 people around the world are involved in modern slavery, which involves work or situations performed involuntarily and under threat of violence or penalty. That averages out to 5.4 people for every 1,000, with a quarter of those being children. Just under 25 million enslaved people are exploited through forced labor, mostly in domestic work, construction and agriculture, bu...