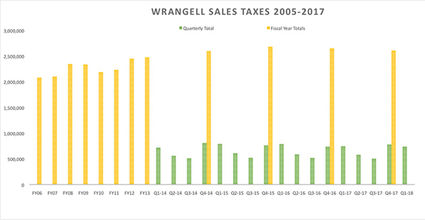 A chart shows the annual sales year totals for the City of Wrangell, from the 2005-2006 fiscal year to the present. The past four years have been broken down into quarters as well, starting with July to September of 2013 for the Q1 period and concluding with the recent July to September quarter in 2017.

The news comes at a time when the region's economy appears to be fragile. Earlier this fall, Southeast Conference released its annual By the Numbers economic report, which found 2016 to have been the first time since 2007 that jobs and earnings were both down from the previous year. The labor force had declined by 434 net jobs, bringing the total number of positions to 45,260 regionally.

The dip accompanies declines in state spending on municipalities over the past five years, as attempts to trim Alask...