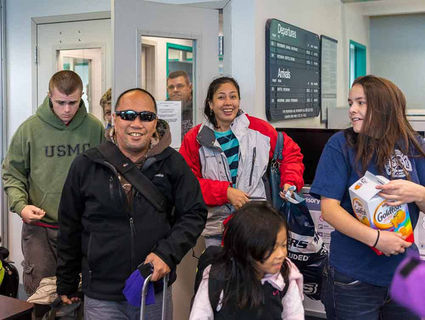 Vincent, Lynn and little Chrysalis Balansag arrive from a lengthy series of flights from the Philippines, after ten months abroad. Not pictured are children Jade and Lee.

After being kept away for most of the year while a petition for residency was processed, the Balansag family returned to Wrangell earlier this month.

The Balansags – Vincent, wife Lynn, and children Jade, Lee and Chrysalis – have been calling Wrangell home since January 2011. They first moved here from the Philippines – an island nation off the coast of East Asia – after Vincent found employment at the local hospital, where he still works as a medical technician.