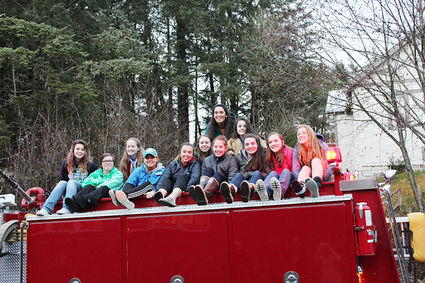 Girls on Wrangell's 2017-18 high school volleyball team have a victory lap around Wrangell Monday afternoon, after returning from the State Championships in Anchorage in second-place. The team swept their way through the bracket to the final round, which necessitated an additional tie-breaker with Petersburg. The team's appearance at State was a first in over a decade, and Wrangell's best-ever showing in volleyball.

With a stellar conclusion to its 2017 season, the Wrangell High School volleyball team finished second at the State 2A Championships on Saturday.

The team headed up early last Tuesday, practicing the next morning at Dimond High School. It was a crowded tournament, between the 2A and the mix-six. Teams were practicing two at a time on court throughout the day.

Beginning play November 30 against King Cove, the Lady Wolves had already been preparing for their first meet. Whitaker said her girls had studied videos of their opponents' play, helping to make up for their unfamiliarity.