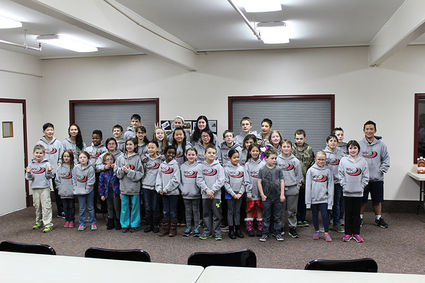 Dozens of swimmers involved in Wrangell Swim Club gather for a mostly-complete group photo before chowing down at an awards ceremony on December 7. Now in its second year of competitive swimming, the club has proven to be a popular activity among local youth.

A dozen members of Wrangell Swim Club joined swimmers from six other clubs around the region in Ketchikan earlier this month.

Entering its second year of competitive swimming, the Wrangell group saw some first and second place finishes from its kids during this year's Mike Smithers Southeast Championship. There were 144 swimmers in all, coming from Juneau, Sitka, Craig, Haines, Petersburg and Ketchikan.

Wrangell coach Bruce McQueen explained the meet is equivalent to the league's regionals, with opportunities to qualify for state-level competition later next year.

Among the Wrangell group,...