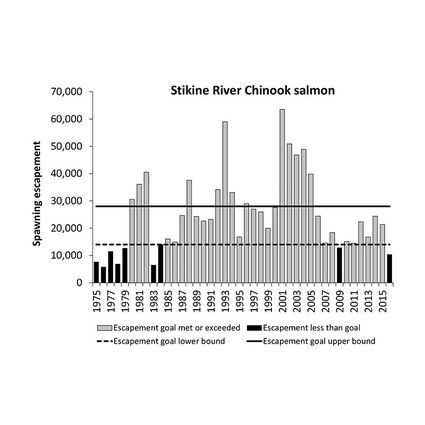 This table released by the Department of Fish and Game last Thursday compares forecasts for Chinook salmon runs next year to the 10-year average and preliminary escapement values for this year. With the exception of the Situk River, Southeast Alaska's major salmon rivers have failed to meet lower thresholds for escapement, potentially prompting special management actions for next year.

Action plans for the emergency management of Chinook salmon in Southeast Alaskan rivers have been drafted ahead of next month's Board of Fisheries meeting in Sitka.

The board, which reviews regulatory oversight of fisheries across the state, planned to meet on January 11 to discuss shellfish and finfish proposals for the coming year. But added to its plate will be a trio of action plans drawn up by the Department of Fish and Game designating king salmon populations in several rivers as stocks of concern.

A stock of concern designation is set after a species demonstrates "a chronic inability...