Wolves 1-1 after weekend away games 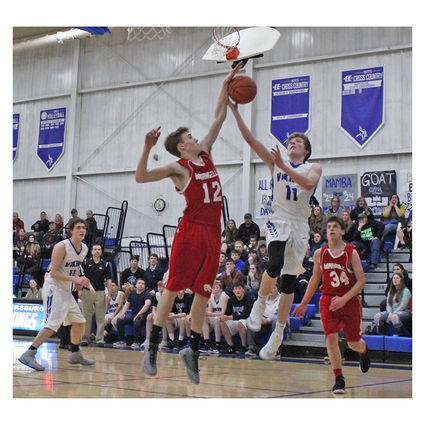 Wrangell student Riley Blatchley and Vikings player Stone Morgan go head to head during Friday evening's boys varsity game in Petersburg. The Wolves started the weekend with a win, but finished it with an even split against their neighboring rivals.

The Wolves split a two-game tournament in Petersburg over the weekend during its regular season opener.

They weren't the team's first games of the year, however, with the Wolves taking part in the Clarke Cochrane Christmas Classic the week prior in Ketchikan. A bit closer to home last weekend, the players were not alone in making the jaunt over to Mitkof Island as dozens of local fans and supporters joined them in the stands when play began January 5.

"We had a lot of support," Wrangell coach Cody Angerman recalled. "Wrangell and Petersburg has always been a big rivalry," which tends to tur...