Shoemaker rebuild coming along after clean bill of health 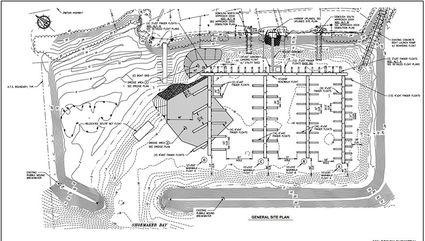 At the 90 percent stage in drafting, the general site plan for Shoemaker Bay Harbor's new float system shows how the layout will be configured. Fingers A, B and C will accommodate 21- to 40-foot floats, with small craft stalls following the main float's outside. Larger craft will be able to pull in at the back end of Finger D, made possible by dredging. The net float will be relocated past the grid, further to the harbor's northern end.

Following a clean bill of health from contaminants testing of dredge material at Shoemaker Bay, the harbor restoration project looks to be continuing on schedule.

Department of Transportation and Public Facilities match grant funding in the amount of $5,000,000 was approved for the project in this year's budget, enabling replacement of the harbor's aging float network. The wooden float structure is in a deteriorated state, with one of its five finger piers currently unusable.

Wrangell Harbor Department's plan will be to replace these with a four-finger float of a more modern design. The fir...