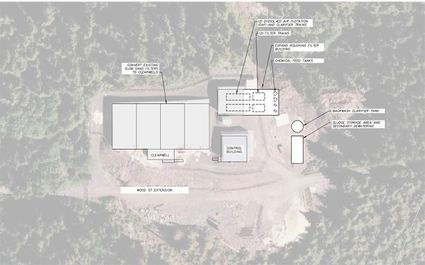 In this site plan prepared by CRW Engineering Group for the City of Wrangell, the municipal water treatment plant would see some new additions to its facility if converted. The dissolved air floatation-based facility being considered would require expansion of the roughing filter building and the addition of new tanks and storage. The current sand filtration units would be converted into additional storage for treated water, doubling the plant's current holding potential.

Wrangell appears to be closing in on a solution to its water filtration worries after a workshop held between the City and Borough Assembly, city staff and consultants on Monday.

Since its construction in 1999 Wrangell's water treatment plant has had a number of problems with its production. The plant's operation involves ozonation of water sourced from two open reservoirs, which then passes through a roughing filter and four slow-sand filtration bays before disinfection.

From the start the plant did not work as planned, with sediment found in the source water supply contributing to poor ro...