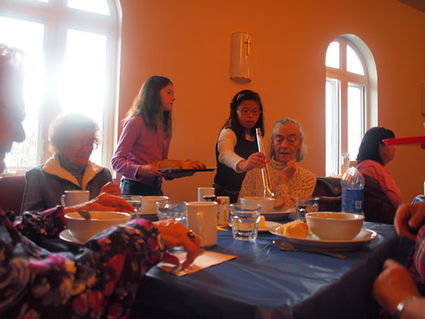 Served soup by Sophia O'Brien, Maria Glenz celebrates Alaska Day in 2013 with other community elders at Island of Faith Lutheran Church. Glenz spent most of her life in the state, and after her passing last year left a considerable donation of money, books and items to Wrangell's Visitor Bureau, museum and library.

City staff from several departments were surprised to learn of one late resident's generosity.

At its meeting in early December, the Wrangell Convention and Visitor Bureau discussed news that Marian Glenz had bequeathed a considerable donation to it. Details at the time had yet to be worked out, but at the Borough Assembly's February 6 meeting, City Manager Lisa Von Bargen had confirmed the contribution totaled $50,000.

Born in Wisconsin in 1936, Glenz spent her youth in Port Protection, Ketchikan, Meyers Chuck and Wrangell. A commercial fisherman, rural postmaster and writer, in her later...