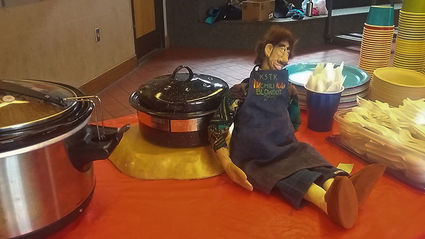 KSTK's coveted award for its annual chili cookoff awaits its winning chef last Saturday. Featuring 17 different recipes this year, the yearly event and its accompanying auction is one of the various fundraisers the station holds.

A nonprofit radio and television service based in Juneau, CoastAlaska provides administrative and technical support for public broadcast

stations in Wrangell, Juneau, Sitka, Petersburg and Ketchikan. Citing financial difficulties, last December Wrangell Radio Group – the entity which manages local radio station KSTK – filed a petition with the FCC to allow a transfer of its four licenses as part of a larger consolidation. Pending that approval, the station's asset...