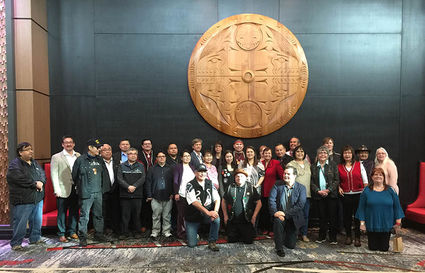 Representatives of Canada's First Nations and Southeast Alaska Indigenous Transboundary Commission members take a group photo during a conference March 13 at the Tulalip Conference Center in Washington. More than 30 participants discussed concerns with transboundary mining activities that would likely adversely affect the ecosystem shared by the two countries. Fourth from the right in the middle row, Wrangellite Tis Peterman participated as SEAITC coordinator.

A free showing of a documentary highlighting the hazards of mining on transboundary rivers drew a pretty decent crowd Monday evening, with seats at the Nolan Center filling up fast.

Released last year, "Uprivers" is the first film made by Matthew Jackson, of Ketchikan. Jackson previously has spent time in Wrangell working with the Alaska Crossings program, and his presentation of the film is part of a broader tour of Southeast Alaska and British Columbia.

Prior to showing his 30-minute work, Jackson explained the issue of Canadian mining and its impact on water quality on salmon-producing r...