King salmon sport fishery closed down across the board starting Sunday 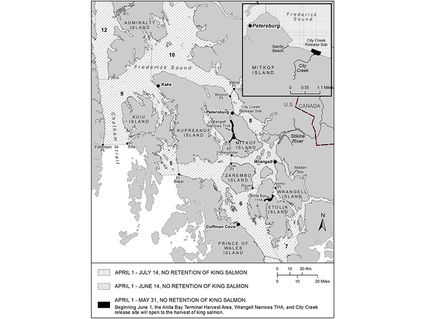 The Alaska Department of Fish and Game announced Thursday the extent of its king salmon sport fishing restrictions this season.

Citing a poor preseason forecast, the department has decided to close the majority of marine waters within the Petersburg-Wrangell area, not only in District 8 but also in 6, 7 and 10. (See map)

In the waters adjacent to the Stikine River, which include District 8 and a portion of the Back Channel in District 7, the retention of king salmon will be prohibited starting on Sunday, April 1 through July 14. Any king salmon caught must be released immediately.

Districts 6, 10 and portions of districts 5, 7 and 9 will prohibit the retention of king salmon beginning Sunday, April 1 but only through June 14.

The 2018 preseason forecast for Stikine River king salmon is 6,900. This forecast indicates the escapement goal range of 14,000 to 28,000 will not be met. Forecasts for other wild king salmon stocks in Southeast are below goal as well. This year's restrictions are being taken as part of a region wide effort to reduce harvest of wild king salmon and increase spawning escapement for future production.