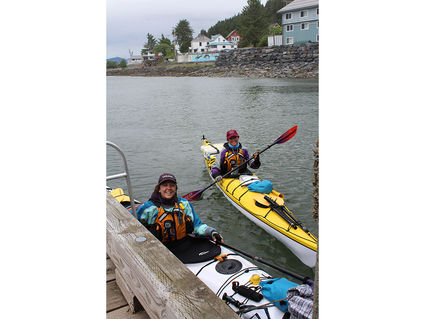 Mathilde Gordon and Lucy Graham arrive at Wrangell's summer dock Friday morning after traversing the Wrangell Narrows. The two are kayaking their way south from Glacier Bay National Park to Vancouver to support marine cleanup efforts in Canada and their native Australia.

A pair of Australian kayakers navigated their way to Wrangell over the weekend, part of a three-month excursion down the Pacific Ocean's northeastern coastline.

Starting in Glacier Bay National Park a couple of weeks ago and terminating in southern British Columbia, their trip is one with two purposes: to raise funds for marine conservation and to raise awareness about the impact of plastics on the world's oceans.

Lucy Graham and Mathilde Gordon come from Cairns, a seaside city in Australia's northeastern province of Queensland. Much as Wrangell is to the Stikine River and Anan bear observa...