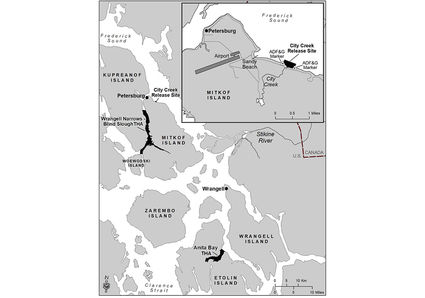 A district map of the Wrangell and Petersburg areas highlights which sections will be reopened to king salmon sport fishing next Friday. The hashed sections of districts 6, 7, 5, 9 and 10 will see restrictions lifted on June 15. The dotted sections of District 8 and a portion of 7 will remain closed for another month.

Districts 5, 6, 10 and most of 7 will soon reopen to sport fishermen for king salmon, according to emergency regulations put in place earlier this spring.

Chinook harvest opportunity has already opened in hatchery areas at Anita Bay, Blind Slough and Petersburg's City Creek, opening up last Friday. On June 15 the next wave of openings will take effect, following a wide scale closure to the fishery at the start of April.

Most of the marine waters in the Petersburg-Wrangell area will reopen later next week, with districts 8 and a portion of 7 in the Back Channel remaining closed until July 15...