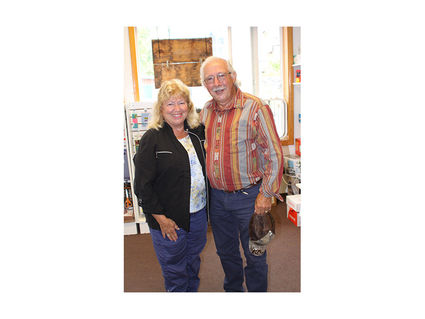 Wrangell had two special visitors this week, Gloria and Albert Bourdon. Albert is the great-grandson of Earl West, the second U.S. Marshal in Wrangell. There are several places across Wrangell Island named after West, such as Earl West Cove, the nearby Earl West Cove campsite, Earl West Creek, and Earl West Marsh. The Bourdons have made several trips through Wrangell and Southeast Alaska to learn more about West, and have found him to be a fascinating character. Besides being marshal, the Bourdon family discovered that West was an avid poet and artist. He was very in tune with Alaska and its nature, they said. "I think the poetry was really amazing," Gloria said. "Earl was really quite an artist, as well," Albert said. "Earl could draw the same image with both hands at the same time. Or he could draw an image of, say, the sea coast with one hand then he could draw animal life with the other. Apparently Earl was not only ambidextrous in drawing and those kinds of things. I think that's what led to his creativity with his poetry. But I think it also had something to do with his effectiveness as a lawman. Apparently he was pretty good with a revolver."