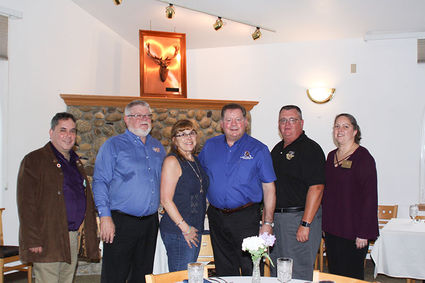 Mike and Barb Luhr (center) and other honored guests sit down for dinner at the Wrangell Elks Lodge last Thursday evening. Luhr is the first Alaskan to hold the position of Grand Exalted Ruler in the Elks organization.

Petersburg native Michael Luhr has been a part of the Benevolent and Protective Order of Elks since 1977, when he was initiated into Petersburg Lodge No. 1615. He said that he has lived in Petersburg for 62 years, and has been an Elk for 42. According to a short biography presented at Lodge No. 1595 in Wrangell, he served in a series of roles at local, state, and national levels for many years.

In a July ceremony this year, Luhr was made the first Alaskan to ever serve as the grand exalted ruler of the Elks.