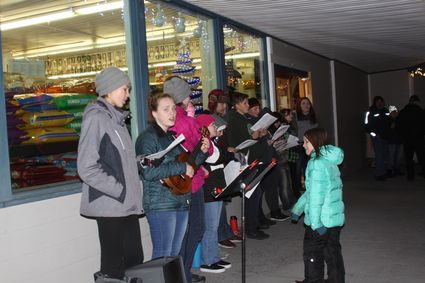 Christmas Carolers sing outside of Ottesen's during Midnight Madness.

It was cold, the evening of Dec. 7, and at times rainy.

That did not deter many Wrangell residents from coming out for Midnight Madness, however. Midnight Madness has been a Wrangell tradition for about 30 years, according to Stephanie Cook with the Wrangell Chamber of Commerce.

"I think it went pretty well, even though it was a little rainy and cold," she said. "There were lots of people who showed up and had fun."

Front Street was crowded as people hung out, shopped, and sang Christmas carols. Many stores stayed open late so people could get their Christmas shopping done. Several organiz...