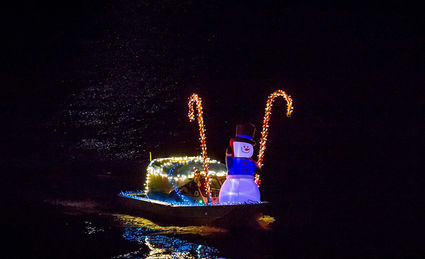 One of the two boats that participated in last Saturday's boat parade. The Christmas boat parade has been a tradition in Wrangell for many years, one that the chamber of commerce has recently been trying to revive

The Doc Davenport Christmas Boat Parade has been a Wrangell tradition since the 1970s, when it was started by Wayne "Doc" Davenport. Fishermen and boat owners of Wrangell, traditionally, deck out their vessels with lights and holiday decorations. As the sun goes down the boats parade across the shoreline, starting at city dock. The parade fell in

popularity in 2012 after Davenport's retirement, according to a 2017 article by Wrangell Sentinel. The chamber of commerce revived the tradition last year, however. Last year's parade brought together nine boats.

This year, however, there was rath...