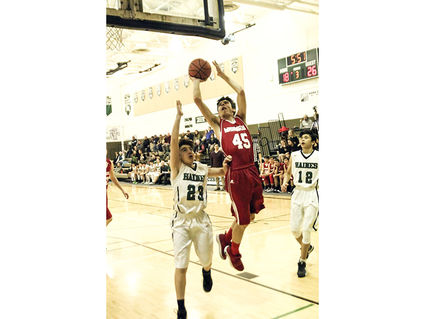 Brett Abrahamson (#45) jumping for a basket.

The Wrangell Wolves basketball team had a hard-fought set of games against the Haines Glacier Bears last weekend. Each game had its tense moments, as both games were determined by only a few baskets.

Wrangell held a decent lead through the majority of Friday's game, on Jan. 18. They held a 12-point lead at one point, in the second quarter.

Things turned against them in the fourth quarter, however. The Glacier Bears were able to gain momentum...