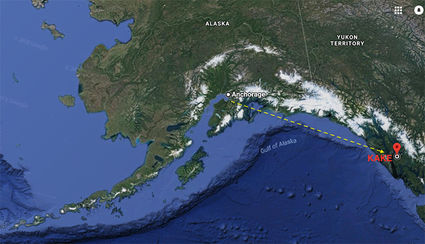 The United States Coast Guard has located possible debris from an aircraft with three people onboard that was due to land in Kake Tuesday evening at 6:19 P.M., according to a USCG press release.

On board the Guardian King Air 200 medical life flight, which departed from Anchorage, was a pilot, a nurse and a paramedic who were planning on picking up a patient in Kake. Because of Health Insurance Portability and Accountability Act regulations, representatives from Kake Health Clinic and Guardian Flight were unable to disclose information about the patient that was to be picked up.

Debris from a plane has been located in the water approximately 22 miles west of Kake near the south tip of Admiralty Island in Chatham Strait Wednesday afternoon, according to a USCG release; however, the Coast Guard can’t confirm if the debris is from the overdue aircraft.

“We have received reports of debris in the water and are concentrating search efforts near that area,” said Capt. Stephen White, Coast Guard Sector Juneau commander in the release. “Through our coordinated efforts with all involved we continue to actively search, we are thankful for the assistance rendered.”

The crews have been searching the last known area of the aircraft since the electronic locating transmitter that is onboard the aircraft is not broadcasting a signal, according to the release.

Petersburg Search and Rescue sent six of its members on board a harbor security boat Wednesday morning at 9 A.M. to assist with the search, according to Petersburg Fire Department assistant fire chief Dave Berg.

Alaska State Troopers, Kake Search and Rescue, Alaska Marine Highway ferries and good Samaritans are also on scene searching for the aircraft and its passengers.

The weather in the search area is a rain and snow mix with overcast skies, 7 mph winds and a 39 degree air temperature, according to the release.

"As part of our ongoing efforts to keep everyone posted on developments, Guardian Flight has released the names of the personnel aboard the missing aircraft: Pilot Patrick Coyle, 63, Flight Nurse Stacie Rae Morse, 30, and Flight Paramedic Margaret Langston Allen, 43, all based in Juneau. We continue to ask for prayers and support as we focus on these crew members and their families during this very difficult time," Randy Lyman with Guardian Flight said in a prepared statement.