"A Herd of Orphans" coming to the Nolan Center 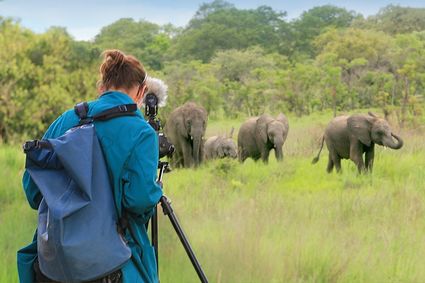 Courtesy of Kelly and Toby Bakos

Filmmaker Kelly Bakos films a herd of elephants in Zambia. The elephants are all orphans who lost their parents to poachers. Game Rangers International, a Zambian nonprofit organization, works to raise these elephants and hopefully release them back into the wild one day. Bakos made a documentary on the elephants and their sanctuary, which will be shown at the Nolan Center next Tuesday, March 26.

Southeast Alaska is well known for its wildlife: Bears, moose, salmon and eagles. The Tongass National Forest is home to a wide variety of creatures. One species that is absent is elephants. Luckily, a Petersburg filmmaker has decided to bring the elephants to Alaska in the form of a new documentary, "A Herd of Orphans."

Kelly Bakos has a background of doing film work for conservation organizations. In 2008, the nonprofit organization Game Rangers International opened up a new "elephant orphanage," where they take in and care for baby elephants who have lost their families. Currently, she s...