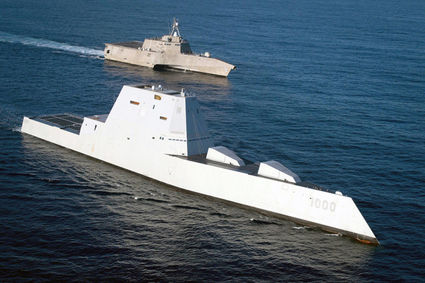 The guided-missile destroyer USS Zumwalt, left, is underway in formation with the littoral combat ship USS Independence on the final leg of its three-month journey to its new homeport in San Diego. The USS Zumwalt arrived in Ketchikan last Saturday.

KETCHIKAN, Alaska (AP) – One of the U.S. Navy's newest class of warships has docked at an Alaska port for a rare visit.

The USS Zumwalt docked in Ketchikan for a weekend stay beginning Saturday, the Juneau Empire reported .

The 610-footlong guided missile destroyer launched in October 2013 and based in San Diego was scheduled to be open for public tours Sunday in the southern Alaska city, officials said.

Steve Corporon, Ketchikan's port and harbors director, said bigger fenders were needed to make sure the ship would fit without damaging the vessel or the dock.