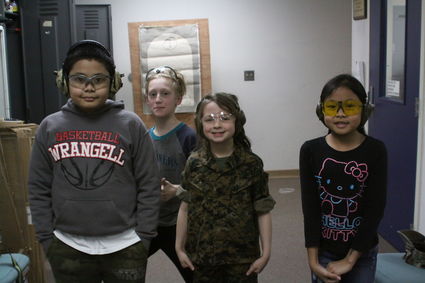 The Pig Plunk shooting contest, held at the indoor range at the public safety building, had several younger Wrangellites in attendance. Pictured from left to right are Lee Balansag, Ian Nelson, Charlie Nelson, and Chrysalis Balansag. Ian took first place in the kid's category, followed by Lee, Charlie, and Chrysalis.

The Wrangell Rod and Gun Club hosted a shooting event at the indoor range at the public safety building last Sunday. The "Pig Plunk," as it was called, was designed as a fundraiser, membership drive, and a fun way to spend the afternoon for club members and visitors. At 16, the turnout was smaller than the club's previous shooting event, the Turkey Shoot last December. Club member Terrell Courson attributed this to the nice weather Wrangell saw on Sunday.

The rules of the competition were fairly simple. Participants were given five shots at a pig-shaped target with a .22 rifle. The closer...