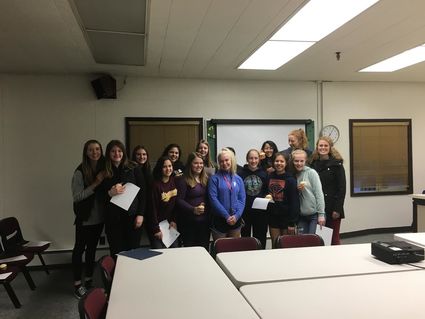 The Wrangell Lady Wolves were recognized for their accomplishments and hard work over the past season by the borough assembly Tuesday evening, April 9. The coaches and players all received a copy of a proclamation read by Mayor Steve Prysunka, as well as homemade cupcakes made by Aleisha Mollen.

The Wrangell Borough Assembly recognized the Lady Wolves high school basketball team during their meeting on Tuesday evening for their hard work over the recent season. Mayor Steve Prysunka, in reading a proclamation congratulating the team, pointed out that the Lady Wolves took first place in regionals, defeating Metlakatla, for the first time in 25 years, and that numerous team members had received several awards and accolades over the course of the season.