Tulley to step down as Evergreen Elementary principal 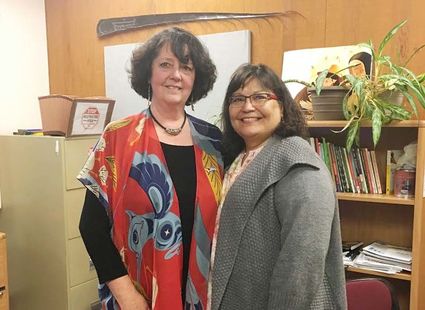 Wrangell Superintendent Debbe Lancaster (left) and Evergreen Elementary Principal Virginia Tulley (right). Tulley turned in her letter of resignation after one year as principal in Wrangell, citing missing her family and unspecified medical issues as her reasons.

Virginia Tulley moved to Wrangell in late July of 2018, ready to take on her new position as principal of Evergreen Elementary School. Coming from Arizona, Tulley has worked in a variety of teaching positions before the move to Alaska. Coming here was a bit of an adventure for her.

“I always wanted to live in Alaska,” Tulley said to the Sentinel, back in July. “I don’t know my specific reason other than I wanted to explore.”

After one school year as principal, however, Tulley decided to put in her resignation. Her resignation letter was accepted by the Wrangell School Board in the...