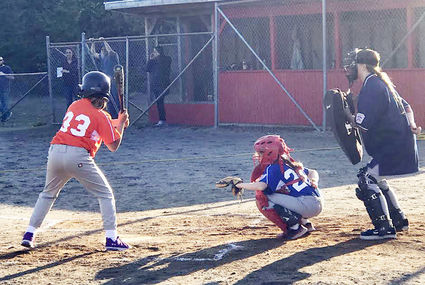 Kiara Lyons (No. 33) of the Rays at bat. Behind her is Sharks catcher Alyssa Roundtree (No. 28). Little League President Brianna Schilling (right) served as umpire for the game, which according to Rays Coach Tawney Crowley was her first time serving in that position.

It was a rough week for the Sharks, one of the three minor league teams in Wrangell's little league program this year. After two hard losses to both the Bears and the Rays, the team is currently 0-4. While they are still working for their first win of the season, the other two teams in the minor league division were able to add another victory to their records.

The first game of the week was against the Bears, who have so far gone undefeated all season. The Bears continued this record with a 6-1 win over the Sharks. Sharks player Haidyn Gadd scored her team's only point that game in the sec...