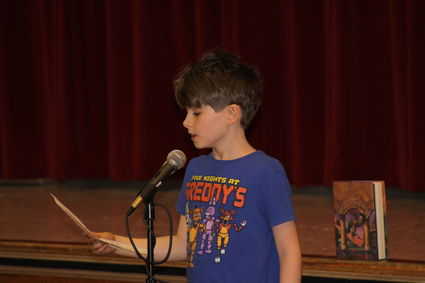 Fifth grade student Dayne Pritchett gave a speech during last week's award ceremony on the benefits of reading. He also presented this speech earlier in the week, as part of a public presentation by Laura Davies' class.

During their second-to-last day of school, on May 22, Evergreen Elementary School held an awards ceremony to recognize several of their students. All of the classes, from first to fifth grade, gathered in the school gym for the ceremony. Principal Virginia Tulley gave the first award of the day to student Kasey Whitaker for having perfect attendance all year.

"We only had one student who's attended every single day," she said. "Give him a round of applause, I mean that is something."

After Whitaker's award, the teachers each took turns handing out awards to their students. There were many a...