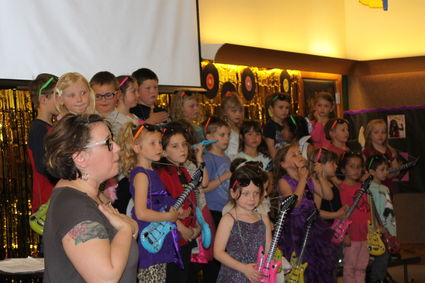 Walking onstage to Queen's "We Will Rock You," 27 Evergreen Elementary's "rockstar" kindergarteners held a graduation ceremony of their own last Tuesday afternoon, May 21. The class of 2031, the year these kids will graduate from high school, is a fairly large group.

The kindergarteners showed off what they had learned through the year, such as their ABCs, the days of the week, and months of the year. Kindergarten teacher Mikki Angerman talked about some of the things the kids learned beyond reading, writing, and other school assignments.

"There are so many things that can't be measured wi...