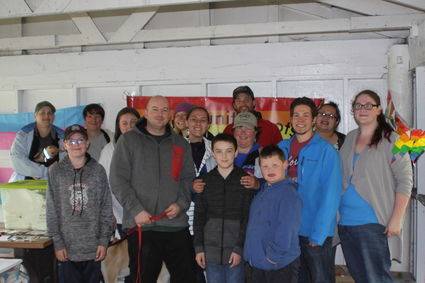 Community Roots, Wrangell's LGBT support group, held a pride picnic at Shoemaker Park last Sunday afternoon. According to the event page on Facebook, the picnic was not only an opportunity for people to come together and share a meal, but it was also a commemoration of the 50th anniversary of the Stonewall Riots which occurred in late June of 1969, when New York City police raided a gay club known as the Stonewall Inn. According to an article on history.com, the raid sparked almost a week of riots and protests. It also served as the beginning of the modern gay rights movement in the United States. Pictured here (left to right, from the top left) are Jennifer and Sheri Ridgeway, Breanne Pearson, Hailey Doss, Jonas Crabtree, Nikka Mork, Timothy Pearson, Nicholas Pearson, Maleah Wenzel, Vivian Faith Prescott, Eli Michael, Brina Collins, Jackson Pearson, and Joan Hurst.