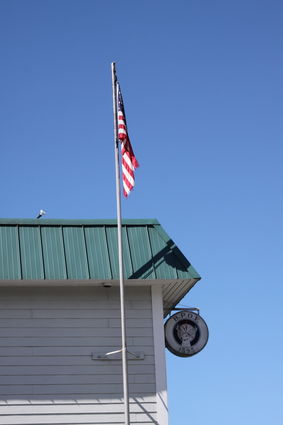 The American flag hanging over the Elks Lodge on Front Street. The lodge will be hosting a Flag Day ceremony Friday, June 14, that is open to the public.

The Wrangell Elks Lodge will be hosting a Flag Day ceremony tomorrow, June 14, beginning at 5:30 p.m. Flag Day is a national holiday, celebrated annually on June 14.

The holiday was established in 1916, by President Woodrow Wilson, in honor of the flag of the United States, and also to give recognition to other historical events occurring near the same time. According to a 2018 article on history.com, Congress first established the Continental Army in June of 1775, during the Revolutionary War. This also lead to the creation of the first "American" flag.