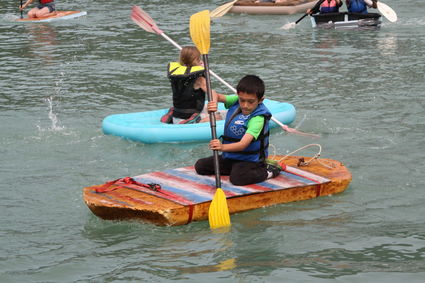 Jayden Daughtery participated in the Crazy Craft race with an older raft his uncle, John Buness, had built when he was younger.

Sunday afternoon at City Dock. The races were divided into two categories,

children and adult, and took place on the dock's summer float. The rules for the races were fairly simple: All participants had to wear a flotation device, and they could use anything that floated except for boats. Starting on one end of the float, the participants raced to the other end of the float and back, paddling whatever device they had created for the event.

Some of the "crazy crafts" used in the race were simple, like air mattresses. Others were more str...