People test their endurance at the Tongass ToughMan 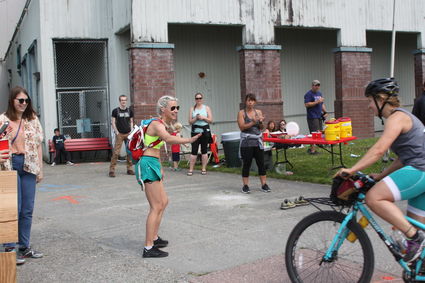 Caitlin Cardinell (left) waits to tag off with Hailey Doss (right.) Doss handled the biking portion of the triathlon, while Cardinell ran.

Wrangell's first-ever Tongass ToughMan triathlon took place last Sunday. Beginning at 6 a.m., participants faced a 1.2-mile (42.5 laps) swim, a 56-mile bike ride, and a 14.5-mile run over Rainbow Falls in a major test of fitness, speed, and endurance. Nick Howell, who helped organize triathlon, said that there were 27 people who entered the competition. Most of these people worked as a team, with one person handling each of the three events. There were six people who signed up individually, and opted to face the entire triathlon themselves. These were Patrick Howell, John and Jamie Bursell,...