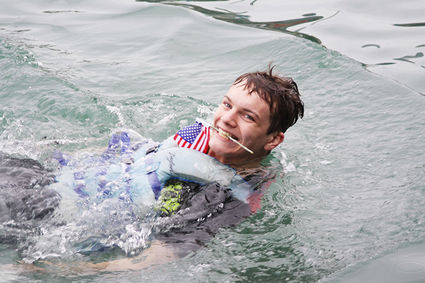 The man, the myth, the greasy. Rowen Wiederspohn was the winner of the 2019 greased pole competition.

Wrangell's annual greased pole competition took place last Tuesday, July 2, at the city dock. The event is a popular part of the

city's weeklong Fourth of July celebration. The competition is simple, in theory, but proves to be quite challenging to those participating. A large log is laid out over the water, on the dock's summer float, and covered in grease. Participants then attempt to scale the log and grab a small American flag on the opposite end. Grabbing the flag means winning $100.

A large crowd of people gathered around the dock and the summer float to watch the competition and par...