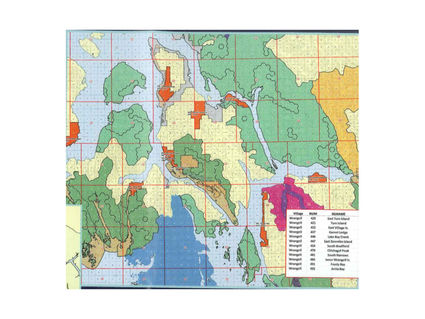 Courtesy of Alaska Natives Without Land

A map showing the proposed land in the Wrangell area that Alaska Natives Without Land are hoping to acquire for a new native corporation. According to Richard Rinehart Jr., they are seeking to claim about 23,000 acres for each of the five Southeast Alaska communities that were left out of the Alaska Native Claims Settlement Act in 1971

The mission of Alaska Natives Without Land is to correct a decades-old injustice done to five Southeast Alaskan native communities. Back in 1971, the group's website reads, Congress passed the Alaska Native Claims Settlement Act. This act granted Alaska Natives 44 million acres of land across the state, and $963 million, to form tribal corporations. In Southeast Alaska in particular, according to the website, ANCSA returned 560,000 acres of land to native ownership. However, five communities were "inexplicably excluded" from the act: Wrangell, Petersburg, Haines, Ketchikan, and Tenakee Spri...