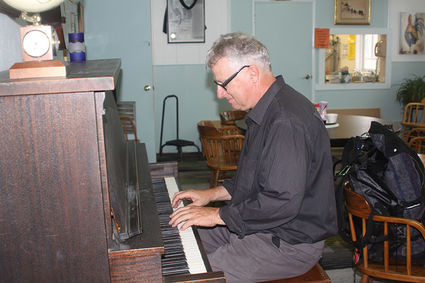 Tom Jenkins, the new site manager for the Wrangell Senior Center, plays on a piano that was recently donated by Shannon Bosdell of the former Harbor House. Jenkins describes himself as a musician, pilot, traveller, history buff, and a big fan of Jane Austen. As the new site manager, he said that he hopes to see the senior center get back to its core mission of providing meals and transportation to Wrangell's senior community, and also becoming "the funnest senior center in Alaska."

After a recent shake-up that saw the loss of the Wrangell Senior Center's site manager, cook, and driver, the facility is working to get back to its normal routine under the new leadership of Tom Jenkins, the new site manager. The center is still looking for additional staff and volunteers, but there are some big things being planned for the future.

Jenkins is originally from Tennessee, he said, and has a background in industrial building. He worked for the senior center in Haines for three years as a driver and staff member before moving to Wrangell. His interests include music, flying, hi...