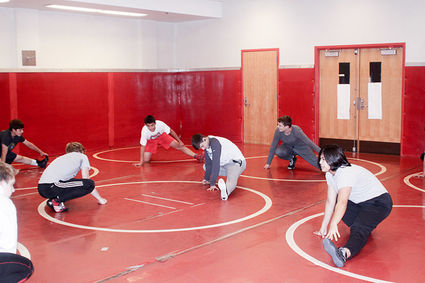 Members of the Wrangell Wolves wrestling team stretch before practice.

While the Wrangell Wolves wrestlers do not have their first meet until mid-October, they have already been hard at work getting ready for the new season. Both wrestling coaches, Jeff Rooney and Jack Carney, said that they are looking at a very talented team this year and are looking to build off of previous successes.

"We won a Region Championship with eight scorers in 2016," he wrote in a Facebook message. "We also took second for 2A at State that year.

This year, it looks like we'll have 13 of the 14 weight classes filled for the Men's team alone. This is the largest team we've had since...